Gwynne and John prepare for the score keeping.

Dan loads up the cart.

Now those are some crazy pants!

Just had to show this close up from the last photo because it's awesome.

All three Jenkins kids together.

All smiles before we begin.

Kristyn is ready to swing big.

Mike hits a long one.

I think that cleared the water???

Jerry is off to a good start.

Wrapping up the round.

Dan is all smiles after that round!

Jerry is ready for more!

Some sort of ballet/golf combo pose from Ashley.

Although the pants are distracting, notice that Ryan is actually about to putt.

Maybe what's more impressive is that Matt is carrying his own clubs!

A drive by shooting... Camera, that is.

Sam turns in the cart.

An unexpected photo of Dan.

John drops a cart off too.

Hey, why not have all of the brothers & sister in one photo?

Ready to head to Baja Fresh for the Awards Ceremony, and ready for another hand-jive round.

Heading out to Baja Fresh.

Hard to believe who won, huh?

Reading off the winners of the individual part of the tournament.

Thumbs up to another great year!

Photos from the 4th Annual JOJ, held on May 24, 2009.  Much like the 3rd Annual Tournament, we played in May to allow more people to attend and to enjoy some of that fine Brea, California weather.

And as expected, the weather was great, and we had the biggest turnout so far - 21 Golfers, and even more friends & family for the now traditional Baja Fresh dinner.

Ryan stretches out before the tournament, as the "peanut gallery" looks on.  The video was taken at the at the first hole at Birch Hills Golf Course.

The first group leading off the 2009 JOJ gets their picture taken as this video was shot by Kim. 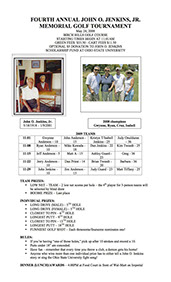 This is the original 2009 Tournament Flier which includes teams, handicaps, and prizes.