Mike has a pile of balls to practice on.

Malia gets ready to drill the ball.

Gwynne shows off her Ladies Championship bag from Arizona CC.  See, we told you we have the best!

Brian, Judy, Sam, Janice, and Danny hang out near the golf cart.

Brian & Kim share a moment on the golf cart.

Mason shows Mai how it's done.

Leyla and Dan warm up.

Uh, are you taking a picture of me?  I'm not sure that's allowed.

The first cart lines up.

Isabell and John... Without the shades!

And now in close up!

Mason still has a few inches on Malia.

Judy and Sam check out the Flier for the 2012 Tournament.  Check out the flier at the bottom of this page!

Ross contemplates life, love, and the pursuit.  Oh, and maybe what club to use on the first hole.

John points out the handicaps to Judy and Sam.

John points out the handicaps to Judy and Sam.

Ross & Mike, ready to roll out.

Now they're feeling it!

Brad tees off in his first JOJ.

Malia on the course.

Dan is happy with that shot.

Dan heads to the putting green.

Brian hits a nice drive, if I do say so myself.

Ross, Ryan and Garrett contemplate the next hole.

Mason does that lefty thing.

Steve knocks one off the tee.

John has a low takeoff, as he goes for distance.

Ryan and his teammates couldn't be more excited.

Twin sisters Janice and Judy wait to tee off.

Hitting over some water.

That's not distracting at all.

I'm sure he'll sink this one.

One shot to there, people... Almost a hole in one!

Which way do we go next?

Leyla will sink this one for sure!

Why not use a putter from there?

See, told you so!

Judy's got this down.

Janice aims for the hole on the 18th.

Ryan strikes it while sister Kim heckles in the background.

Mike goes for it.

Garrett hopes for a little curve at the end.

Mason goes for the long putt.

Steve finishes it off.

Malia taps one in.

Brian studies this one.

And it's headed in the right direction.

This one may drop for Isabell.

And that, my friends, is in the hole.  Way to go Malia!

The peanut gallery waits for the other golfers to finish.

The peanut gallery waits for the other golfers to finish.

Taking over the patio at Stonefire Grill in Fountain Valley.

Part of the crew.

Mason laughs at the comedy!

American Girl dolls make everything better... Even a bogie.

Mason gets some practice balls.

Jeff realizes just how much he has shrunk since last year.

Robert gives the double thumbs up to the JOJ.

Mike, Ryan, and Tina.  Maybe Tina will play next year???

Our biggest turnout yet!  We had 7 groups of golfers participate in the 7th Annual tournament at David L. Baker Golf Course.

As to be expected in the summer, it was a pleasantly warm day on July 29, 2012.  Spirits were high as the intense competitors took to the green for another great year of golf.

The entire Award Ceremony for 2012, hosted by John and Gwynne.

It's a shocker!  For the first time in a long, long time, Dan doesn't come in last place, much to Lelya's disappointment.  Dan explains. 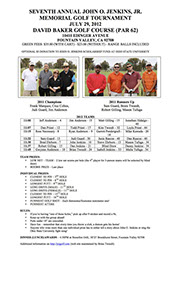 This is the original 2012 Tournament Flier which includes teams, handicaps, and prizes.