Eric readies for the 1st hole.

Mai takes his first few swings.  This was Mai's first time in the tournament.

...something tells me he's going to do just fine.

Malia warms up, with her Dad taking notes.

This was Savannah's first year at the JOJ.  She warms up with a nice drive.

Jeff arranges Kim's hips in an awkward way.  Let's see if it works.

And she's off to the races.

Fresh off the boat from Hawaii, Kaitlyn warms up.  Okay, airplane.

And hits a long one!

Brad warms up... shoeless as usual.

Gwynne and Mickey Mouse look on.

Terry and Jeff seemed to have lost the top of their hats.

So after this we get chicken nuggets, right?

Kaitlyn provides a seat for a future golfer, Cooper.

Anybody need a caddy?

Leyla is warmed up.

It's all in the back swing.

It's in the hole!

We got this thing wrapped up... If only we were on the same team.

Newly engaged couple... and wed-ding rehearsal?  Wait, you told me everybody would be wearing a tie!!!

Who has the honors this round?

Eric & Jim get ready to roll out!

Snack time before the long drive.

On the Course... Jim

Meltem lines up for a drive.

Don't worry... That lake is really far away.

And follows through nicely.

Jim tees off on the front 9.

We only ran over one goose.

Matt sets up as Tina waits for her turn.

Brad hits a long one.

Jeff putts one in.

Where did the cart go?  That's the best part of golf!!!

And he sinks it!

Birds of a feather???

Hey, at least it didn't go IN the water!

Waiting for food at Stonefire Grill.

And here we go!

And the first one goes to... Matt!

Dan gets "Closest to the Pin - 2nd Hole"

Who will be next?

And here's the pants that helped seal the deal.

Yvette is honored to receive the first "Eloise Jenkins Memorial Award" for those who help out.

It was another warm, sunny day at David L. Baker Golf Course at Mile Square Park for the 8th Annual JOJ on August 25, 2013.  This was the third time the tournament had been held here due to the temporary closure of Birch Hills.

The turnout was great, and besides a brief trip to the ER from an errant golf ball (not hit from a JOJ player, I might add), the day was a huge success.

The JOJ welcomed first-timers Mai, Savannah, Tina, and Err as well as a lot of familiar faces. 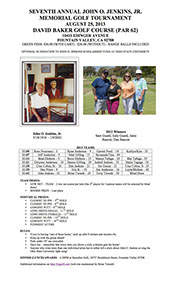 This is the original 2013 Tournament Flier which includes teams, handicaps, and prizes.