John and Gwynne welcome the golfers to the 2014 contest.

Kim, Owen, and Savannah help with the scorecards.

Mike does his pre-game stretches.

Mason's got it down.

Gwynne takes one for a ride.

Brian shoots one out there.

Malia gets ready to drive... the golf cart.

Judi hits a good one.

Mai gets another swing in.

Sam hits this one square on.

Some of the ladies pose for a shot, while Mason attempts a photobomb.

Owen's first tee off at the JOJ... EVER!

Garrett takes a look at the yardage.

Gwynne hits one on the 9th fairway.

Mai contemplates his next shot.

... and decides that he may actually be able to hit those golfers ahead!

Jim lines up his shot.

Thumbs up for this hole!

Isabell his one on the back 9.

Judi waits for her turn.

The kids at Stonefire Grill.

Cheers to a great 2014 tournament.

Look what I can do!

Owen gets his first award.

Malia gets her first of many awards.

Now Owen gets another one!

Garrett gets a prize for longest drive.

Ryan wins for "Closest to the Pin on Hole 8"

Savannah shows off her award-winning wardrobe.

Jim with his prize for funniest shot.

Garrett finishes off a Hi-5 with Mike for winning.

The Booby prize isn't too bad!

With the help of the internet, the kids sing along to the Ohio St. Fight song.

As a multiple winner, Malia tells a JOJ story.

Brian captures the ceremony on video.  Check out the video below to watch the "2014 Awards Ceremony."

The weather was warm, but fairly pleasant at the start of the 2014 JOJ.  We were missing a few of our regular golfers this year, but the slightly smaller group had a blast.

This was Owen Tweedt's first year as well as Mason's friend Miguel's first year.  A great time was had by all, and this year, the competition went down to the wire.

Everyone is now looking forward to the 10th annual!

Warming up for the 2014 tournament couldn't be more fun!

While on the golf course, Savannah recounts a funny golf shot, and then philosophizes on golf strategy.  Hilarious.

The entire Awards Ceremony held at Stonefire grill.  Relive the thrilling moments... Who will take home the prizes?  Find out!

The winning group recounts their victory at the 9th Annual JOJ... And it's a group that has never won before.

The winner of the funniest outfit

(Spoiler alert - it's Savannah!) describes her outfit in all of it's pug glory. 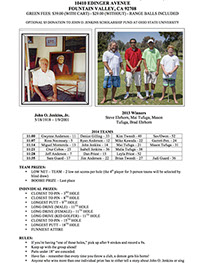 This is the original 2014 Tournament Flier which includes teams, handicaps, and prizes.