For the 10th Anniversary, we returned to the remodeled Birch Hills Golf Course in Brea, CA.

Checking with Pop on her swing.

Jeff gives a pointer to David.

Ryan greets Ross... and they claim they didn't plan the matching shirts.  Hmmmm....

Savannah and Owen are already hot!

John shares a laugh before teeing off.

Owen and Gwynne check out the flyer.

John explains the rules to some first time JOJ golfers.

Ryan Anderson leads off the tournament.

Not to be confused with Ryan due to his wardrobe, Ross tees off.

DH drills one off the first tee.

John and Mai walk toward their ball.

Sam putts, not long after Jeff hits the "Longest Putt" on the 9th hole.

Mason chips onto the green.

John tees off with the Brea foothills in the background.

Leyla and Savannah pose on the 9th.

David tees off on hole 6.

Jerry clarifies the scoring with John while David looks on.

Brian tees off on 6.

Cruz putts on the 9th hole.

Cruz and Danny on 9.

Mai hits over a bunker on 7.

Mai hits over a bunker on 7.

Kim and Denice cruse down the 9th fairway.

Leyla checks out her putt on the 11th hole (formerly the 18th hole).

Kim and Savannah strike a pose in pink.

John hits an approach shot on 13.

Denice sits on the cart while Kim does the "I want a mulligan" dance.

Jerry gives the 'ol thumbs up!

Judi hits in the fairway.

The crew chows down at Pepz for the first time.

Dan and Mai chatting it up.

Alice and Matt chat about the amazing golf.

Ella, Owen, Leyla, and Savannah hang out in the parking lot after eating a lot of pizza!

For the 10th Anniversary, the 2015 tournament triumphantly returned to Birch

Hills Golf Course in Brea, CA.  Many of the players returned from Amanda and Brandon's wedding in San Diego to attend.  The weather was scorching hot, reaching a high of 98 degrees.  And the Awards were at Pepz's Pizza for the first time.  We also had our largest attendance ever!  Woohoo!

Returning to Birch Hills, this Awards Ceremony took place at Pepz Pizza and Eatery in Placentia.  Pepz was hopping on Saturday evening as Gwynne and John announced the individual prizes and overall team winner. 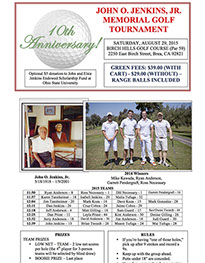 This is the original 2015 Tournament Flier which includes teams, handicaps, and prizes.