"My feeling is to always see the good side of a person or a situation." 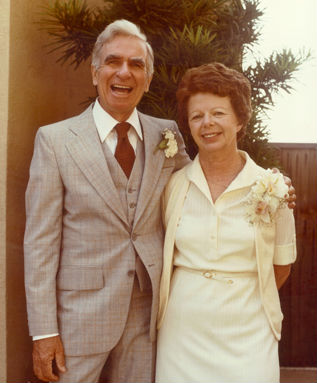 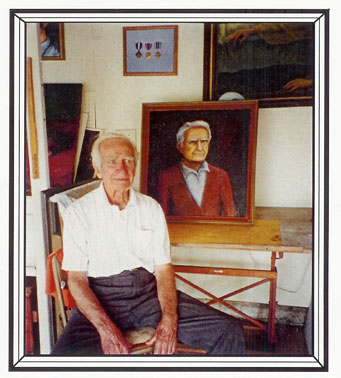 John Oscar Jenkins, Jr. was the first of three sons of John and Elsie Jenkins.  He was born in Columbus, Ohio on May 21, 1918.  He was know as Johnny, but his birth certificate officially read, Baby Boy Jenkins.  As a young boy,  John had one golf club, a mid-iron (2) with a wooden shaft, that he’d hit into cans in his yard for hours.  John’s father was a grocer and owner of the Jenkins Market.  (His mother had worked as a secretary in a buggy factory.)  The various jobs John held were: newspaper carrier, grocer/butcher, drug store clerk and soda jerk, movie theater usher, U.S. Navy pilot (Officer), commercial artist, and then, for 35 years he taught art--primarily in High School, but all grades from Kindergarten through College.

John was close with his two brothers, Palmer and Tom.  His closest relative to a sister was his mother’s younger sister, Helen Palmer.  She was the person he says who influenced him to go onto college.  He took trips with her and, on one trip to Boothbay Harbor in Maine, he painted his first oil painting, after only one basic art course.

John attended Ohio State University from 1936-1941, where he majored in art and education.  After Ohio State, John started Civilian Pilot Training, and then flew in the Navy for 4 years (1941-1945).  He received medals including the Navy Cross for combat heroism.  He earned his Master’s Degree in 1946.

During this period, John taught first at Poly High School, (Wilson in summer) and then Millikan High School from its first year until his retirement in 1981. He influenced so many people he met in many positive ways: He always could find something good about anyone’s artistic efforts; he had an infectious and sometimes corny sense of humor which made education and life itself fun; he wanted the best for and saw the best in everyone; sports, fitness and health were important to him; art and history were his passions and he wanted to share them with everyone.  He enjoyed people and life.

Great childhood memories which all our neighborhood shared in included our “creative” Christmas trees:  Every other year Dad made artistic trees out of hula hoops, strings, ribbons, balls, holly, a huge tree branch painted white, an upside down Christmas tree, and so on.  We enjoyed the “normal” tree on the odd years, but, looking back, the artsy trees were uniquely special.  He always designed our Christmas Cards, which were works of art.  We had the most “basic” camping trips, where cooking hot dogs weren’t always the priority--hot chili spread on top heated things up just fine, and the pup tent wasn’t much protection, but we didn’t really care!  We had several family reunions with our Ohio and East Coast relatives, but our biggest family vacation was the trip that John and Eloise saved up for, researched carefully, and enjoyed to the fullest: a trip to 11 countries in Europe in 1966.  Judy was there with a college friend, but John and I got to go with Mom and Dad in a VW around Europe, seeing every art gallery, museum, cathedral and golf course that we could.  What an education!

After he retired, he continued to share his love of art, golf, and life with his seven grandkids.  John was healthy until his final bout with cancer and he died January 9, 2001.  He maintained his zest for life, his sense of humor, his love of his wife, Eloise (who passed on June 4, 2013) and his family until the end.